Why Couldn’t Our Great Economists Have Foreseen This? 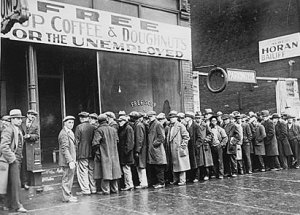 Okay, so I read today that IBM is laying off 4,000 people and off-shoring the jobs to India. This is nothing new and has been going on for quite a while now. Companies under pressure from stockholders to turn a profit and a big return on investments, have been moving jobs out of the country for years. I ask anyone to go to a store today and try to find an article of clothing Made in America. I had commented about an article that was written, I believe in Mother Jones about a reporter who tried to buy just American for a week and had great difficulty. Even in my own neck of the woods where the twin cities of New Bedford and Fall River were home to the textile industry saw all of that go away. Once humming factories have long since been converted to office space, apartments, outlet stores, or gone up in infernos fueled by floors soaked for decades by oil from sewing machines. In my lifetime, I saw the great Fall River Knitting Mills go the way of the dinosaur. They used to make great sweaters, but started to lose business from off-shore where they don’t have child labor laws or worker’s rights.
So rather than just getting product from overseas, they are now exporting whole jobs. It is more blatant, but guess what. There is nothing you can do about it. That’s right nothing. What are you going to do to a company like IBM? Stop buying ThinkPads? Um, no, they sold that out to Lenovo. So what can we do? Nothing.
I hate to be a downer, businesses are in the business of creating profit and big returns for their investors. They outsourced a lot of manufacturing. What did they have left? Jobs. They have to turn a profit, that is what our culture demands. So they start cutting jobs to keep the returns via dividends coming. After all, when the economy takes a downturn, investors shouldn’t take the hit. Cut executive salaries, are you nuts? Like Boston radio host Jay Severend said, and mind you, I don’t agree with him or his ways, but happened to hear him talking about this, if you reduce executive salaries then the only people you will get to run the companies are some professors from Harvard. I think the point being made is that these guys know how to run a business but don’t make the million dollar salaries. Well, maybe that is what we need. Because quite frankly these guys that are running the companies for million dollar salaries and bonuses to match, are driving companies in the ground. The unfortunate part is they are driving our economy into the ground also.
So, what I have to ask all these economic gurus that were saying how great things were as the DOW broke 13000, how long did you think this paradigm would work? At some point we had to reach that tipping point where we got rid of so many jobs that it started to affect retail sales. And of course, because companies are stuck in that old paradigm, just react in the same way they have been conditioned, they lay off workers. So even more people are put on the bread lines and guess what, retail sales go down, oh of course, execpt Walmart. So with sales down, profits down, what do companies do, the only thing left they can, lay off more workers.
Of course, at some point we had to hit the tipping point.
So this news about IBM putting 4,000 more workers on the skids and sending the jobs to India is just a continuation of the same old paradigm. Why can’t we do anything? Well, besides these corporate execs not listening, IBM with the sale of its PC division to Lenovo got out of the consumer market. They sell services to corporations. Since sending jobs overseas allows them to sell those services for a lower price, corporations, their customers, are happy. Are you beginning to see how this paradigm is like a snake eating its own tail? At some point, you run out of tail.
So to hear people in shock about this economy, in shock about how retail sales are down, housing sales are down, car sales, in shock that we have to have yet another round of layoffs.
So what we need is a new paradigm. We need a way to get all these people back working. Unfortunately, until we do, we will just continue this spiral.
In the interim, maybe we should relearn the old ways. Start by planting mini-gardens. Be sure to use heirloom seeds so that you can keep your own seeds and be able to replant the next year. Learn how to can and preserve foods. Learn how to make your own bread. Our grandparents and great-grandparents survived the depression by coming together and helping each other. So until corporations get the bigger picture and stop being more concerned about investor returns and executive bonuses, than in what they are doing the economy, it is up to us to help each other.

1 Response to Why Couldn’t Our Great Economists Have Foreseen This?